Massive weight loss can leave excess skin around the body, including the outer thigh and buttock regions. The buttocks often become deflated and saggy. Surgical butt lifts not only help remove that excess skin, but also lift and tighten the buttocks to improve the shape and provide a more appealing, youthful buttock contour.

Schedule a consultation to get your exact cost for a surgical butt lift. 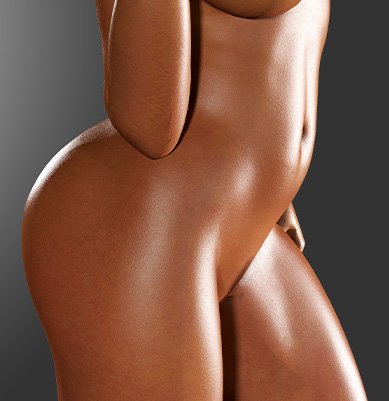 What is a Surgical Butt Lift?

A surgical butt lift after significant weight loss is different from a standard Brazilian Butt Lift (BBL). This is because severe skin laxity, nutritional issues, and fat distribution changes can cause dramatic deformities.

It can be difficult or outright impossible to achieve your ideal appearance, even after massive weight loss. When diet and exercise are not enough, surgery may be required to remove stubborn fat spots and loose skin. It is common for massive weight loss to be accompanied by excess flaps of skin. This usually causes your butt to look deflated and saggy; however, a Dr. Bray’s butt lift works to remove extra fat and loose skin.

Once lifted, the buttocks appear tighter, and have a more youthful contour. Dr. Bray may also sculpt the lower back and waist using liposuction if excess fat remains in those areas.

What You Should Know About Surgical Butt Lifts

How does butt contouring after weight loss differ from other procedures?

Patients who have experienced significant weight loss often do not have adequate fat for buttocks augmentations with fat transfer. Since the skin is generally loose, and the gluteal deformity can also be too severe for common butt enhancement implants as well. Newer procedures, such as gluteal auto-augmentation and gluteal lifts are surgical buttlifts designed specifically for weight loss patients.

This is a procedure most suitable for patients who have excess skin and deflated, saggy buttocks, with little fat. Although Dr. Bray removes the skin from the buttocks, his goal is to retain all of the fat. The fat is rotated into a pocket over the muscle to act as a natural, pseudo-implant. Removing the skin reduces the deflated, sagging aspect of the buttocks, while keeping the fat improves its projection and volume. Leaving what is already there also ensures the buttocks look more natural than if Dr. Bray was to remove the fat or add an implant. The procedure is similar to the idea of pulling up one’s saggy pants to where they want them to be; the pants aren’t removed, they’re adjusted for a fuller, shapelier appearance of their buttocks.

Although this procedure is complex, Dr. Bray believes it produces a dramatic, but natural-looking result. As such, he spends much of his practice performing this procedure on women and men who have lost a tremendous amount of weight.

A gluteal lift is also frequently performed on patients who have lost a considerable amount of weight or are dealing with loose skin in the buttocks. The primary difference between a gluteal lift and a gluteal auto-augmentation is the removal of fat. As such, patients who undergo this procedure have stubborn fat spots difficult to remove with diet and exercise alone. The loose, stretched skin, resulting from damaged elastin and collagen is removed, while the stubborn fat may be removed using liposuction or direct excision.

Dr. Bray’s goal in his practice is to create significant, natural-looking results. While many surgeons will merely perform gluteal lifts without liposuction because it is time-consuming, Dr. Bray ensures no steps are skipped. If skin is removed, but stubborn fat spots are not, the buttock’s appearance will be awkward. When both are removed, the result is a shapelier, natural, youthful appearance.

What butt enhancement procedure am I a candidate for?

If you have enough fat and adequate skin elasticity, you may be a candidate for a fat transfer procedure, otherwise known as a Brazilian Butt Lift. If you have little to moderate fat, but excess skin drooping/laxity, with gluteal-autoaugmentation, circumferential body lift, or excisional buttlock lift. These procedures are commonly performed by Dr. Bray in weight-loss patients or patients with significant skin laxity due to sun exposure or aging.

Preparing for a Surgical Butt Lift

Medical conditions, such as heart disease, hypertension, thyroid problems, diabetes or the regular use of certain medications might affect your surgery. If any of this applies to you, you should consult with your family physician and ensure these other medical conditions are optimized. Dr. Bray will further advise if your health conditions might have an impact on your anticipated surgery.

No smoking of any sort of nicotine, vape or marijuana products for approximately two to four weeks before your procedure. Continuing to do so might adversely affect your surgical outcome. We also advise not consuming alcohol at least a week prior to surgery.

Follow Dr. Bray’s instructions concerning diet, hygiene and medications. Before any kind of surgery, your stomach should be empty, which is why you should not eat or drink after midnight the day before the procedure

Make sure to wear comfortable clothes and shoes to allow easier change of clothes before and after surgery. Please arrive without any jewelry, makeup and nail polish on the day of the procedure. If you wear contact lenses, please switch them out for glasses.

Ask someone to drive you to your appointment and pick you up after surgery.

In line with COVID-19 regulations, we have reassessed our cleaning and sterilization protocols. Upon arrival in our office we conduct symptom screenings with a questionnaire and check our patients’ temperature. We also require mask wearing for our staff and patients. COVID-19 testing before surgical procedures is mandatory in order to protect our staff. Please inform yourself regarding testing centers in your area and arrange for testing prior to your surgery.

We require a number of lab tests, diagnostic tests and medical evaluations leading up to your surgery. The nature of these tests will vary according to the procedure, your age, health, history, and other key health factors. Make sure to run all the necessary blood work and receive clearance before any surgical procedure. Necessary testing may change based on procedure, age, health, history and other factors.

It’s of utmost importance to follow all of your surgeon’s instructions regarding diet, supplements and medications. Stop drinking alcohol and smoking of any kind. Avoid exposure to sick people and quit taking blood thinning medications, such as Aspirin, Ibuprofen and a number of supplements. Post-surgery preparations should be made, such as arranging transportation, getting time off from work, stocking up on food and anything else you will need post-surgery and making sure someone will stay with you during the first two days after the procedure.

Figure out what you are going to wear, follow your surgeon’s instructions regarding pre-surgery fasting and any other preparation measures. Go to bed early and get well rested before your big day. We also recommend getting your house in order and buying ice packs to help with swelling after the surgery.

Dr. Bray’s goal in any of his procedures is to create a natural look and feel. with a BBL or body lift, Dr. Bray’s techniques allow it to feel as natural as possible. Dr. Bray performs the procedure and sutures the wounds in such a way that the tissue flaps heal to your other tissues. As such, they become nearly indistinguishable from normal buttock tissues.

What to Expect After a Surgical Butt Lift

After surgery, Dr. Bray will provide instructions to follow to avoid infections, complications, and fat loss. He will also explain how to care for drainage tubes, if necessary. It is important to note that any compression/stretching to your butt, such as sitting, bending or laying on your back should be entirely avoided for 3 weeks. During this time, you must sleep on your sides or stomach. After 2 weeks, you may sit on a donut-seat or pillow. After a week, you may resume light daily activities but must avoid heavy lifting or exercise. After 8 weeks, you may resume regular sitting and sleeping on your back. Any pain you experience will likely be minimal to moderate, but Dr. Bray will prescribe you pain medication.

It is important that patients only participate in light activities for the first few weeks, and avoid major physical responsibilities for up to 6 weeks. Those who commute to work typically require 3-4 weeks off. Since patients generally spend much time at home during the recovery period, it is critical they optimize their home environment for recovery. This will allow the healing period to be smoother and more comfortable. It generally takes six months to fully heal and see the final results of a Brazilian butt lift.

For this procedure, there is a high risk of minor complications; that being said, safety is of Dr. Bray’s chief concern. Thus, he is very involved in the post-operative care process. Patients will meet with him periodically to examine the area, care for the wound, and plan for the remainder of the healing process. Low risk complications include portions of the incision not healing together completely and irritation of sutures under the skin. However, these complications are manageable so long as the patient follows Dr. Bray’s instructions.

Schedule a private consultation with Dr. Bray by submitting the form below or calling his offices directly at 416-323-1330.

Schedule a private consultation with Dr. Bray by submitting the form below or calling his offices directly at 416-323-1330.